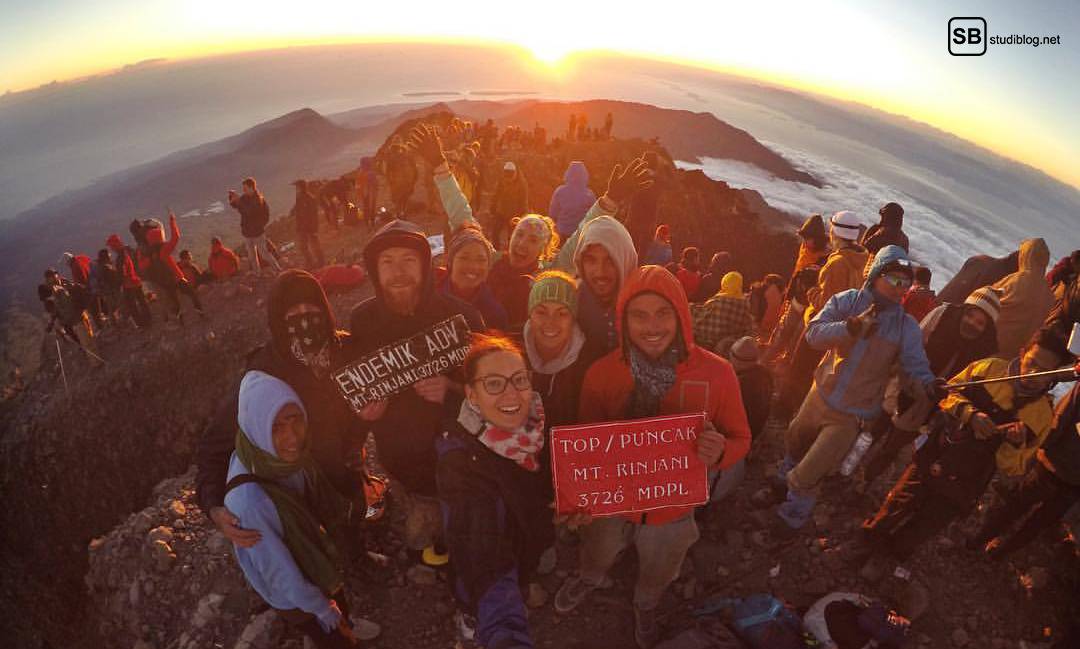 END_OF_DOCUMENT_TOKEN_TO_BE_REPLACED

And what a bitch she was! It was a tough nut to crack. But the more you buckle down, the greater the success, right? Even though I couldn’t stop cursing because I hated this bitch most of the time. When she was lying underneath me it was the best feeling ever and more than satisfying. The bitch’s name was Mount Rinjani.

Go with the flow!

When I was in Bali, single traveling for four weeks and totally enjoying my life, I spent some of my time with a few guys from around the world. One of them asked if I wanted to join him hiking up the Rinjani, a 3.000 meter high volcano on the Island Lombok, which is still quite active! I was like: “Of course, why not!”. My motto for this trip was “Go with the flow” so I didn’t even think about it very long as it sounded like an exciting adventure. The next day we already made our way from Gili T with a local boat to Lombok and directly into the heart of the island.

We spent one night in a homestay near the village Sembaloen, which was already quite close to our final destination. The trip we booked was a two day hike with one night spent in a tent at the base camp of the volcano. You can make a three day hike as well but gladly we didn’t do that. On day no. one our alarm went off at 7 o’clock in the morning. And to be fair enough, that was already quite tough for me as I had a really easy going time the last days on Gili T.

After breakfast we had a short briefing about our forthcoming trip. We had to borrow some warm clothes, a forehead flash and gloves as our last hike up to the peak would be in the middle of the night. Well, good to know! So my final gear for the hike was made of a light scarf, a long sleeve, a hoodie, leggings, trainers, a jacket and gloves (unfortunately they were out of flashes) and also my small backpack with basic stuff like toothbrush, phone and underwear.

A van dropped us and our two guides off at an altitude of 1.200 meters where our hike started. We were in a group of twelve very lovely and fit people from all across the world. All our food, tents and equipment for the next two days was brought up to the mountain by carriers, which haul about 30 kilos on their shoulders up this thousands of meters in height. The first part of our hike, until the lunch break, was really decent. We got to know each other, talked to our guides (who were more like children than men) and enjoyed the green landscape around us. Though we were all happy to have a rest after our noodle soup for lunch. But after this break the mountain showed off his real face.

I am used to hike 1.000 meters in height a day. I do that regularly with my family in the alps. But you really can’t compare the tracks in the alps with what we were meant to walk on up this mountain! The ground started to become more and more dusty, what turned out to make you slip a lot. Honestly what we were walking on can’t even be called a track, more like several paths straight up to the top, beaten by thousands of feet before us.

No serpentines, no solid ground, no hiking sticks. Every one of us thought about surrendering at this point already, whereas the carriers in their flip flops and dozens of kilos of our equipment on their shoulders overtook us easily. I was sweating like a pig, covered in dust, no shower in sight. But we pushed us and at about 4 in the afternoon even the last ones of us reached the basecamp.

Words can barely explain the feeling when you arrive there. Exhausted, dirty and smelly you finally reach even ground again. Clear blue sky, a cool breeze around your heated body and a view over hundreds of tents before a volcano and the lake in its crater, someone jingling on their ukulele and you just enjoy the moment and yourself.

The basecamp was covered with hundreds of tents in different colors by the various tour providers. A tent, a camping mat and a sleeping bag formed our night-quartier. I barely slept 3 hours (compared with the others still pretty much!) with my backpack as a pillow and stones in my back. We got some fried rice for dinner, which honestly didn’t satisfy my hunger. The portions in Indonesia generally aren’t made for western stomachs. As a toilet we used a whole in the ground nearby our tents, shield from views by a plane. At least we got toilet paper! Not to be thought of a shower. But nonetheless we really enjoyed our evening on the mountain. Our group was great – young open minded people, ready to conquer the volcano. The guides and carriers were super nice and did their best to make our stay as comfortable as possible.

Our short, uncomfortable and cold night ended at 1am in the pitch black night. You can’t even imagine the stars up there. What a view! The dark night sky behind the even darker silhouette of the volcano, spotted with thousands and thousands of stars, crystal clear air and an atmosphere full of zest for conquering the mountain. A few torches moving up and down in the distance were already on their way to reach the summit for sunrise.

After a few cookies for breakfast (eat them, you need the energy!) we continued our journey. Quickly our group split up. I found myself alone, a few guys of our group literally started to race up this mountain as others were left behind me. This last section in the middle of the night up to the summit is separated into two mad grades. On both you walk upon volcanic dust and boulders. For each step you take forward you slip two steps back. I don’t want to imagine how it would be to hike up during the day, with the relentless Indonesian sun upon you! At this moment I was really grateful for the cool and dark night.

In the middle of the second grade, at about 4am, I was totally exhausted. I barely needed some energy and only had water with me. The tour guides usually give you tons of cookies, but everyone from my group was nowhere to be seen. So I asked a young Indonesian guy for some food and he shared his chocolate with me. You may not believe how thankful I was for that. And after a short rest I was ready to go again. 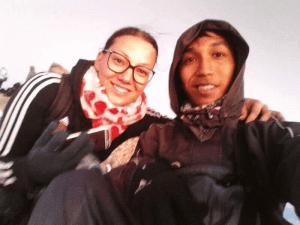 His name was Ronni and he seemed to be as whacked as I was. Our pure and unbroken will made us to continue this never ending story. The dark summit was in sight since hours. My legs were burning. Torches were plowing their way up the dark obscurity before us. ‘One step after another’, ‘You will make this’, ‘You can’t quit’, ‘You’re too far already’, ‘You must be on the summit for sunrise’; what’s been going on in my mind;

Anyhow we managed to come closer to our goal. But the nearer we closed up to the summit, the steeper the mountain and thus our way turned out to be. ‘For Fucks sake will this ever end?’

The darkness of the night slowly shrank, a small orange line appeared on the horizon. I started to divine what was waiting left and right of the track – gaping chasm. But the better was the view. 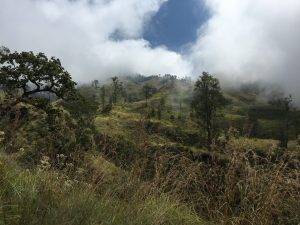 The beginning sunset grew quickly. The small orange line above the see spent more and more light and the summit wasn’t far anymore. I gained new energy, my will rekindled. With strong and powerful steps I took my way past the mountains victims sitting in the dust. Only 100 more meters, now weaving through all of those who reached the summit before me. The view was already vaguely perceptible.

And then I reached the highest point of Lombok and fifth highest of Indonesia. 3726 meters above zero. Nearly 6 o’clock in the morning. Lombok formed around me, surrounded by the Indonesian ocean. A nearly perfect 360 degrees view, further islands far away in the calm sea, a fuming volcano in the center of the crater lake, a rising fireball on the horizon, and 2.500 meters behind me. The forces of nature everywhere around. 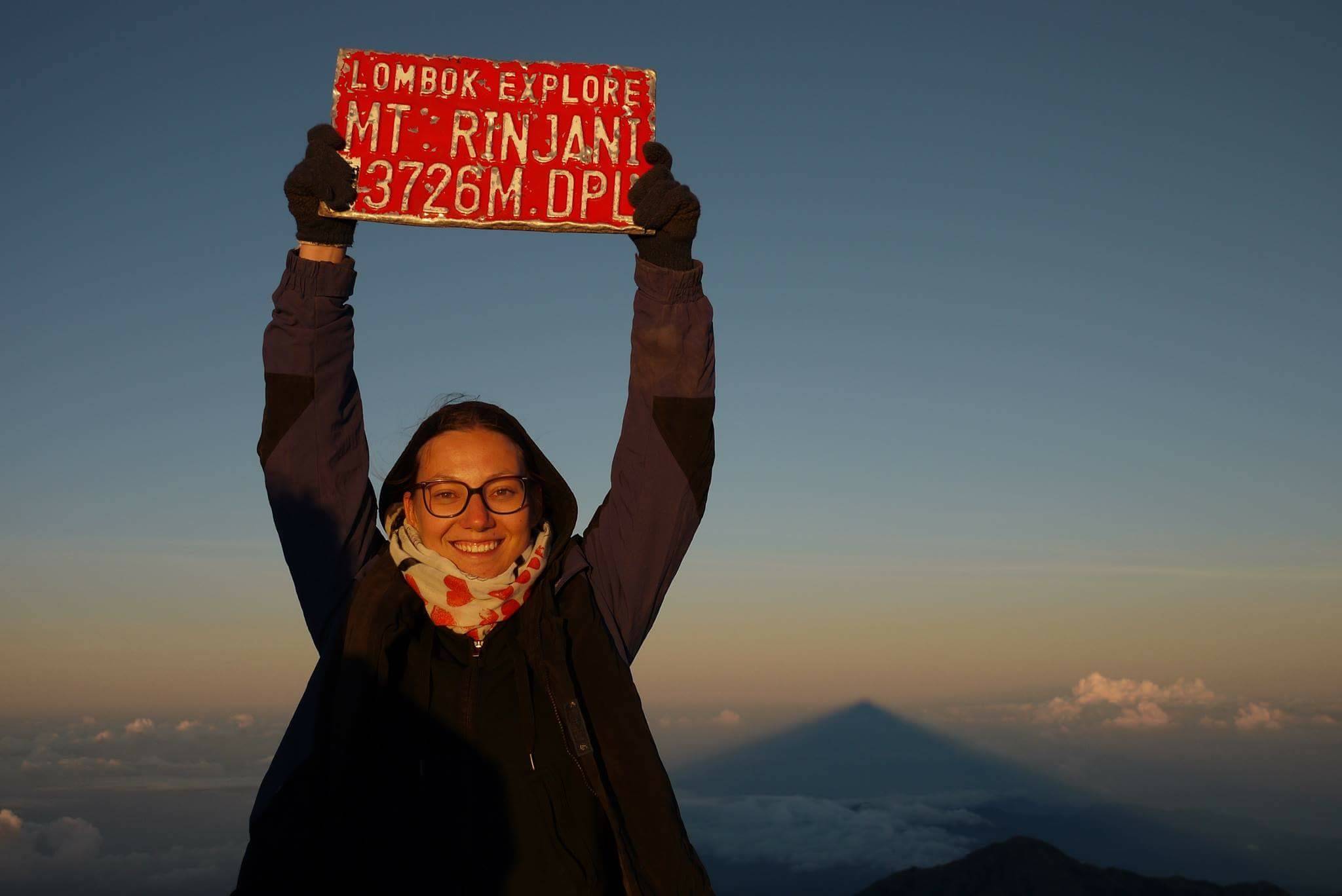 I’ve never been so proud of myself. I conquered this beast, I did it, my pure will brought me here. The blisters on my feet were forgotten. The dust in my shoes disappeared. And the past exertions were totally worth it. What a feeling! The whole world lying to your feet, it is your oyster. Just go for it! Keep your goals in sight, don’t let quitting be an option and fight. This was the lesson the Rinjani taught me! Thank you!

I could have stayed up there for ages, if there only wasn’t this freezing breeze. And my growling stomach. After loads of pics and giving thanks to Ronni, it was time to go back to the base camp, having the best Banana-Pancake Breakfast ever and anyhow getting off this mountain. And if you think the hard part is over after reaching the summit, imagine going all the steep and slippy way back down. After lots of falls and swears our drained bodies arrived back at our starting point and the relieving shower was within reach. My body was sore for days after these exertions, but I would immediately do it again. Only for the liberating feeling of reaching the summit! 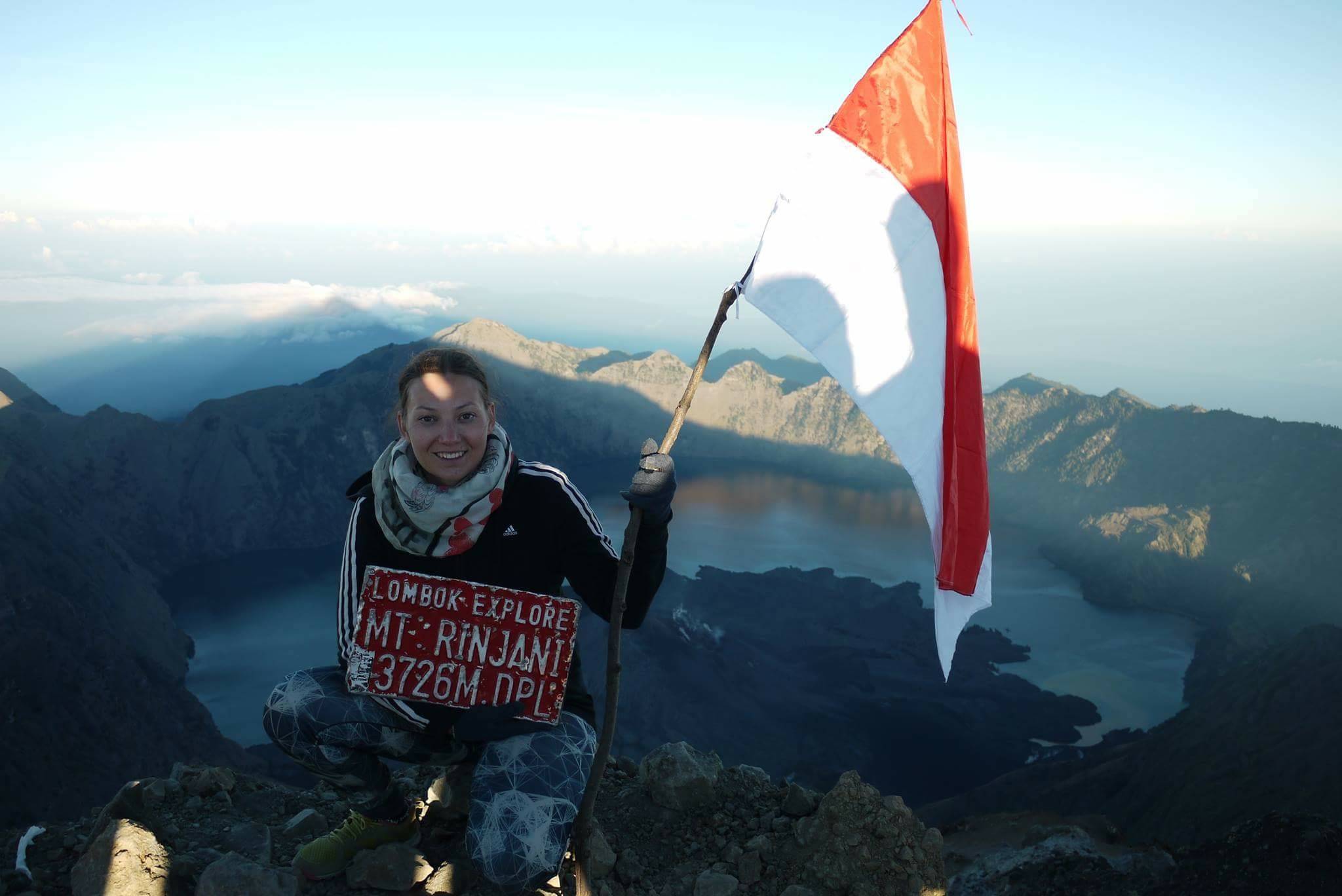 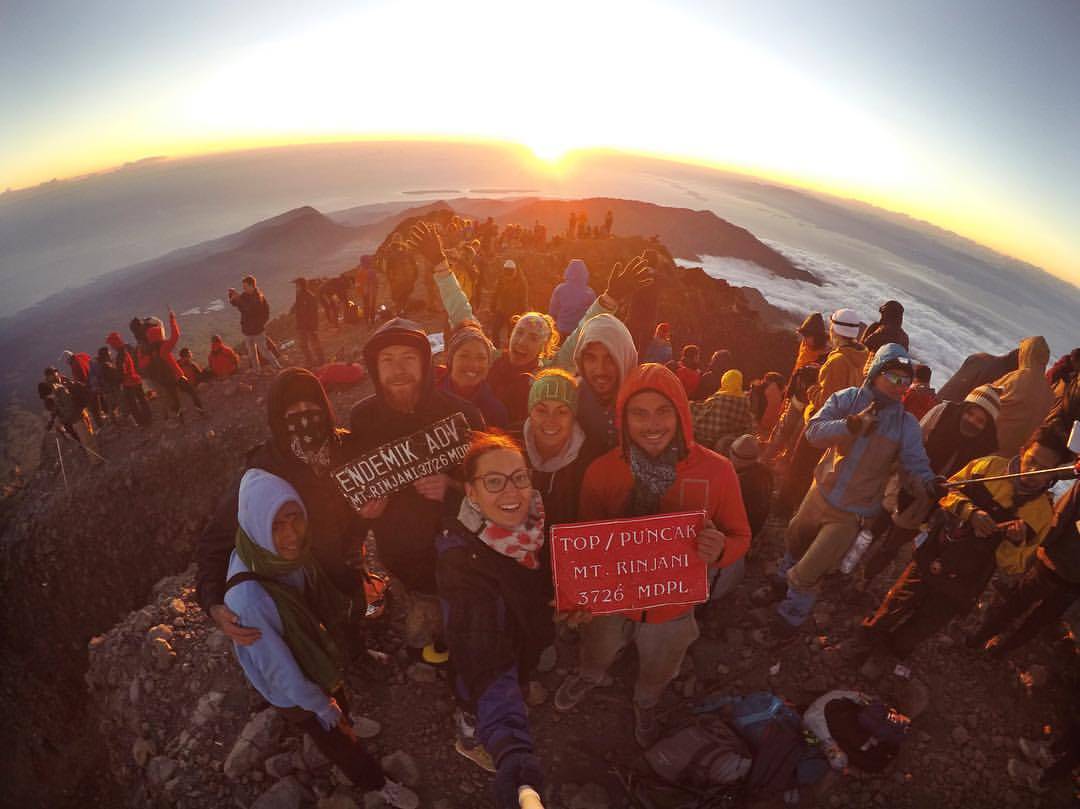 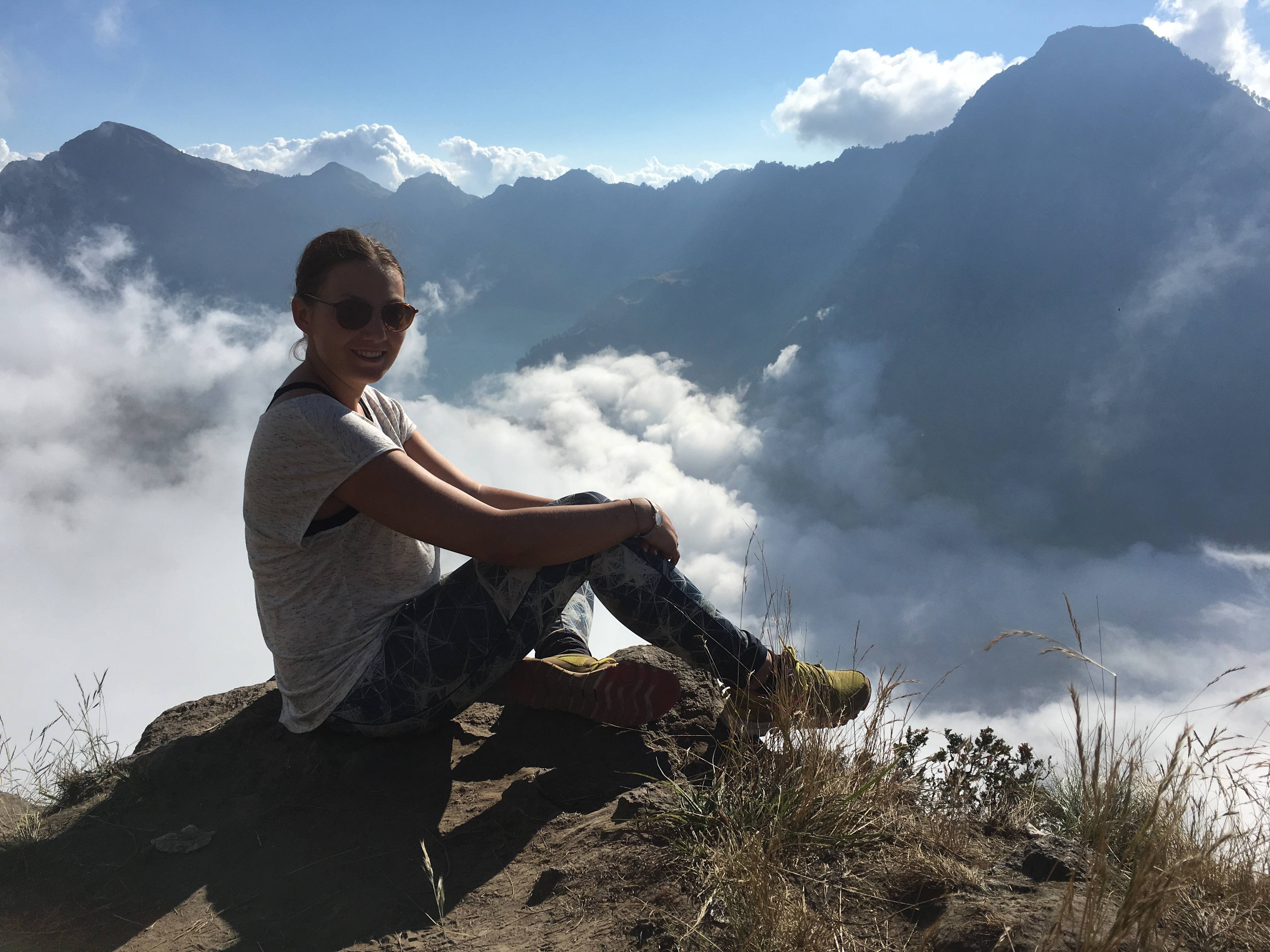 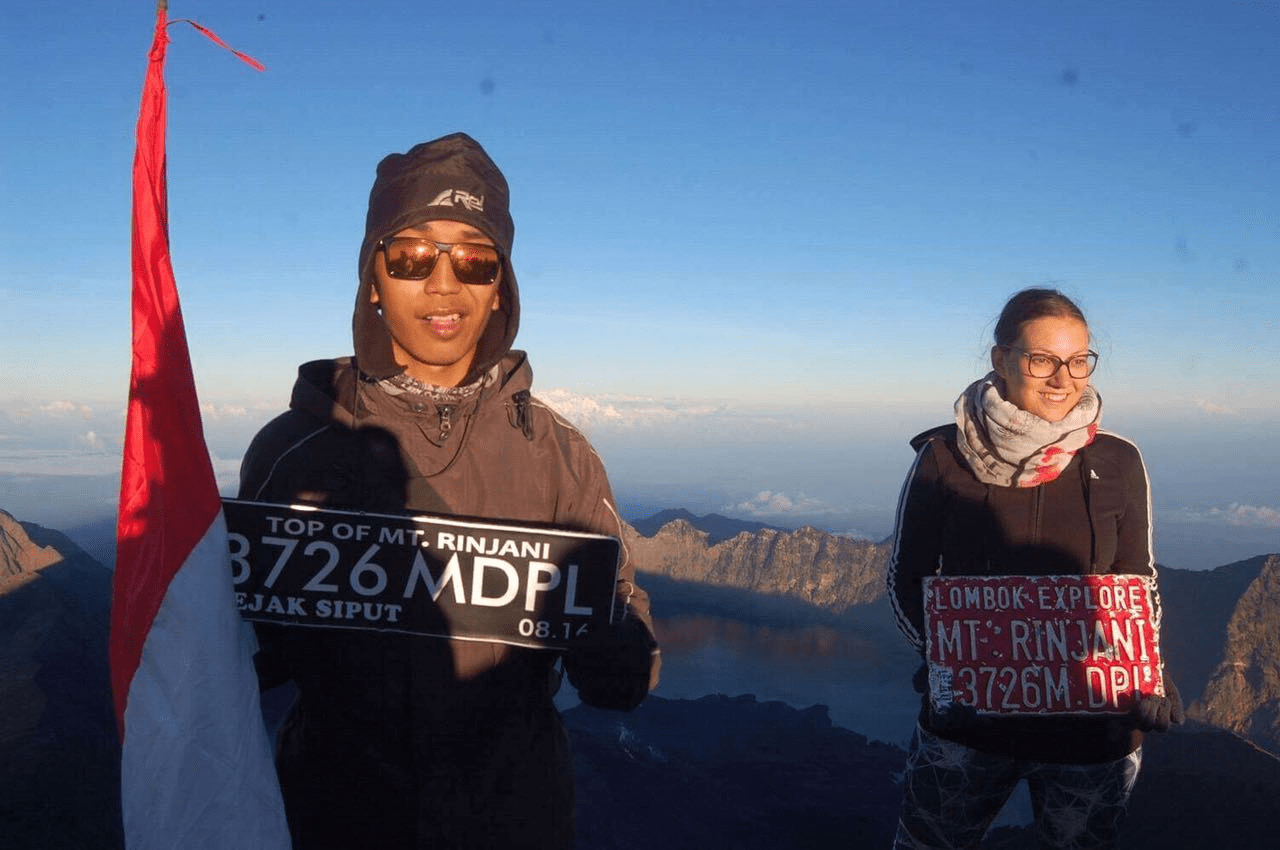