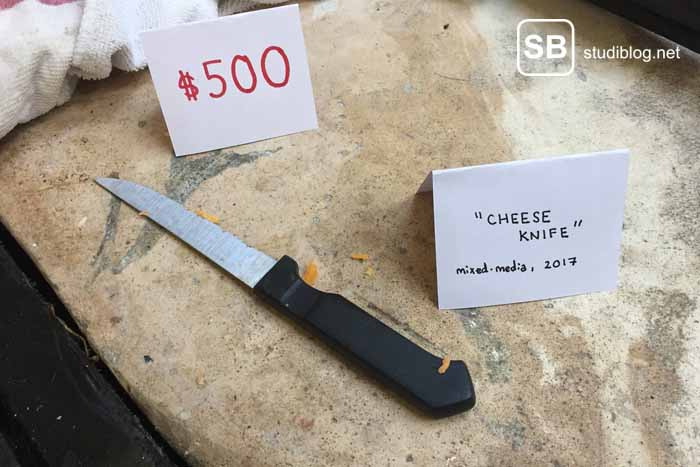 Living in a flat share often means proving nerves of steel. Especially when the roommates are a little more chaotic than you while leaving their stuff lying around. You stumble over shoes, there are no more clean pots and the garbage is overflowing. What could be more suitable as an educational measure than simply exhibiting the roommate’s leftovers? That’s what Justin Cousson thought and published his “passive-aggressive Art Gallery”.

Based out of my home in Hollywood, CA, my passive-aggressive art gallery, which spotlights ignorance of basic responsibility and courtesy for others in shared spaces, has been thriving, although some critics don’t care for my emphasis on found pieces.

Knife left out on counter in striking distance of knife block, having been only used to remove seal of Ice Cream carton, which was also left on counter, leaving quite the sight as the last thing I saw before I gratefully left town for two weeks.

Boxes eft on couch because what even is breaking them down and recycling or even leaving them not on the couch.

Clothes left in dryer overnight, then another night, then…

It seems to be really difficult for some roommates to put used things back where they got them. But this could well lead to problems and disputes in shared flats if one person pays close attention to order and the other lives according to the motto “Only a genius can master chaos”.

If you want to see more of this exhibition and other extraordinary objects, follow Justin Cousson on his Instagram channel @passiveaggressiveartgallery.

Would an gallery like that work in your flat? Feel free to share your experiences in the comments with us 🙂
via: schlecky silberstein